The Thames Water Ring Main at Kew is an approximately 2.5m diameter concrete segmental lined tunnel that passes obliquely right beneath the new 8-storey Heritage Walk apartment blocks. The ring main is sensitive to ground movement because the water within is under a low pressure and may leak if the tunnel became excessively distorted. For the development to receive planning permission, its piled foundations needed to be kept clear of an exlusion zone around the tunnel (which created a complex foundation geometry) and the resulting settlement, rotation and distortion of the tunnel needed to be kept within tight limits.

A 3D FEA model of the proposed foundations, ring main tunnel and surrounding ground was used to predict tunnel displacement and show that the tight limits would be satisfied leading to the award of planning permission. 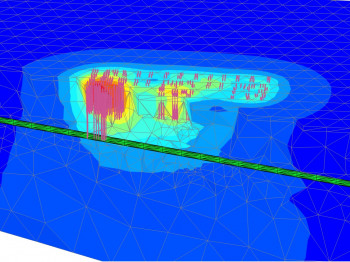